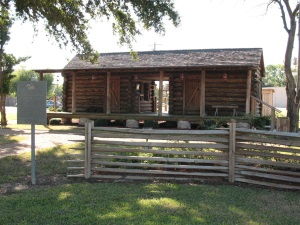 In April of 1836, Sam Houston and his small band of men defeated the powerful Mexican army under the leadership of General Santa Anna on the San Jacinto Battlefield. Following the battle, Sam Houston, David Burnett, and the Texas Cabinet went to Dr. George Moffit Patrick's cabin to draft the initial treaty papers securing Texas' independence from Mexico.

The Birthplace of Texas

The cabin was Patrick's home and was located 1.5 miles from the San Jacinto Battlefield on Buffalo Bayou where Dow Chemical (formerly Rohm and Haas) is located today. Because of this significant historical happening on Deer Park soil, Deer Park holds the distinction of being the true "Birthplace of Texas."

The City of Deer Park proudly displays a representation of Patrick's Cabin at 1410 Center Street between 13th Street and Helgra. The model was constructed in 1985 by a group of city employees in the Parks and Recreation and Public Works departments. In the fall of 2007, a joint effort by the Beautification Committee and the Historical and Tourism Committee moved Patrick's Cabin from Dow Park to its more prominent and permanent location on Center Street. Modifications to the interior and exterior of the cabin, in addition to the location site, have been made to better capture the authenticity of the 1830's.

For more information on Patrick's Cabin and the history of Deer Park, check out the Historical Brochure.